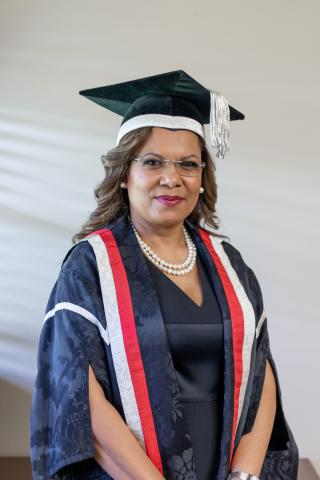 The UWI Regional Headquarters, Jamaica W.I. Monday, September 20, 2021.—Dr. Stacy Richards-Kennedy has been appointed Interim Pro Vice-Chancellor for Global Affairs at The University of the West Indies (The UWI).  With effect from August 1, 2021, she assumed leadership of the regional university’s global engagement portfolio and is responsible for coordinating internationalisation and strategic global initiatives across The UWI system.

Since 2016, Dr. Richards-Kennedy held the portfolio of Director of the University Office of Development and subsequently, the University Office of Global Partnerships and Sustainable Futures (OGPSF) at The UWI and played a pivotal role in deepening The UWI’s collaborations with multilateral development partners, international foundations, and university consortia.  In addition to spearheading the mobilisation of significant funding for The UWI, Dr. Richards-Kennedy has successfully led several flagship initiatives that have helped to bolster The UWI’s global positioning as an SDG-engaged university. These include the SDG Youth Advocacy Campaign, the establishment of the Global University Consortium on SDG-13; the UWI-UNDP Public Policy Think Tank for a Blue Economy; the Leading Climate Action Special Report; a BBC StoryWorks Film on UWI Tackling the Effects of Climate Change and the Global Institute for Climate-Smart and Resilient Development (GICSRD).  In the 2020 Times Higher Education Impact Rankings, The UWI placed among the top 2.5% of international universities working on advancing the 2030 sustainable development agenda.

Dr. Richards-Kennedy co-chairs the International Steering Committee for the Centre of Excellence for Oceanography and the Blue Economy at The UWI Five Islands Campus and is a founding member of the Board of the SUNY-UWI Center for Leadership and Sustainable Development in New York.

A national of Trinidad and Tobago, Dr. Richards-Kennedy is fluent in Spanish, French and English.  During the course of her career, she has built an expansive network of international partners across all geographic continents.  Dr. Richards-Kennedy holds a Doctorate in Education from The University of Sheffield, an MSc in Development Management from American University (Washington DC), an MBA specializing in International Finance from American University (Washington DC) as well as a Postgraduate Diploma (International Relations) and Bachelor of Arts in Foreign Languages, both from The University of the West Indies (St. Augustine, Trinidad).  Her research interests include the development impact of university research, knowledge brokerage and development effectiveness.

The University of the West Indies warmly congratulates Dr. Richards-Kennedy on her two-year appointment and wishes her a successful tenure.

The UWI has been and continues to be a pivotal force in every aspect of Caribbean development; residing at the centre of all efforts to improve the well-being of people across the region.

From a university college of London in Jamaica with 33 medical students in 1948, The UWI is today an internationally respected, global university with near 50,000 students and five campuses: Mona in Jamaica, St. Augustine in Trinidad and Tobago, Cave Hill in Barbados, Five Islands in Antigua and Barbuda and its Open Campus, and 10 global centres in partnership with universities in North America, Latin America, Asia, Africa and Europe.

The UWI offers over 800 certificate, diploma, undergraduate and postgraduate degree options in Culture, Creative and Performing Arts, Food and Agriculture, Engineering, Humanities and Education, Law, Medical Sciences, Science and Technology, Social Sciences, and Sport. As the Caribbean’s leading university, it possesses the largest pool of Caribbean intellect and expertise committed to confronting the critical issues of our region and wider world.

Ranked among the top universities in the world, by the most reputable ranking agency, Times Higher Education, The UWI is the only Caribbean-based university to make the prestigious lists. In 2020, it earned ‘Triple 1st’ rankings—topping the Caribbean; and in the top in the tables for Latin America and the Caribbean, and global Golden Age universities (between 50 and 80 years old).  The UWI is also featured among the top universities on THE’s Impact Rankings for its response to the world’s biggest concerns, outlined in the 17 United Nations Sustainable Development Goals (SDGs), including Good Health and Wellbeing; Gender Equality and Climate Action.

(Please note that the proper name of the university is The University of the West Indies, inclusive of the “The”, hence The UWI.)