Uncovering Guillain-Barré Syndrome in the Caribbean

The Caribbean has moved one step closer to uncovering the link between the Zika virus disease and a rare neurological illness.

Once an obscure pathogen, the mosquito-borne Zika virus quickly spread to more than 40 countries in the Americas after an outbreak in northeast Brazil in early 2015. The outbreak could pose an economic burden of $3.5 billion on Latin America and the Caribbean alone, according to a World Bank estimate.

Much is yet to be understood about the syndrome and its link to Zika, in part because it is so rare. A study published in The Lancet in April found “evidence for Zika virus infection causing Guillain-Barré syndrome.” The Centers for Disease Control and Prevention has said that the Zika virus is “strongly associated” with the syndrome, but has stopped short of declaring it a cause of the condition.

Another study published in The New England Journal of Medicine in August suggests that even asymptomatic Zika infections could bring on Guillain-Barré syndrome. In seven countries that experienced Zika outbreaks, there were also sharp increases in the numbers of people suffering from a form of temporary paralysis. From April 1, 2015, to March 31, 2016, a total of 164,237 confirmed and suspected cases of Zika and 1474 cases of the Guillain-Barré syndrome were reported in Brazil, Colombia, the Dominican Republic, El Salvador, Honduras, Suriname and Venezuela.

A new Caribbean-based initiative, launched by The University of the West Indies (UWI) in partnership with the Erasmus Medical Centre in Holland, aims to shed even more light on the relationship between Zika and Guillain-Barré syndrome. Researchers from both institutions are working together to collect data on confirmed Guillain-Barré syndrome patients who are also confirmed Zika patients. The data can be used to generate meaningful insights into how the two illnesses are linked.

“What are the chances that if you have the Zika virus, you will develop Guillain-Barré syndrome? That’s something that we want to know,” said Thomas Langerak, a PhD student in Virology at the Erasmus Medical Centre who is researching the neurological complications of the Zika virus. 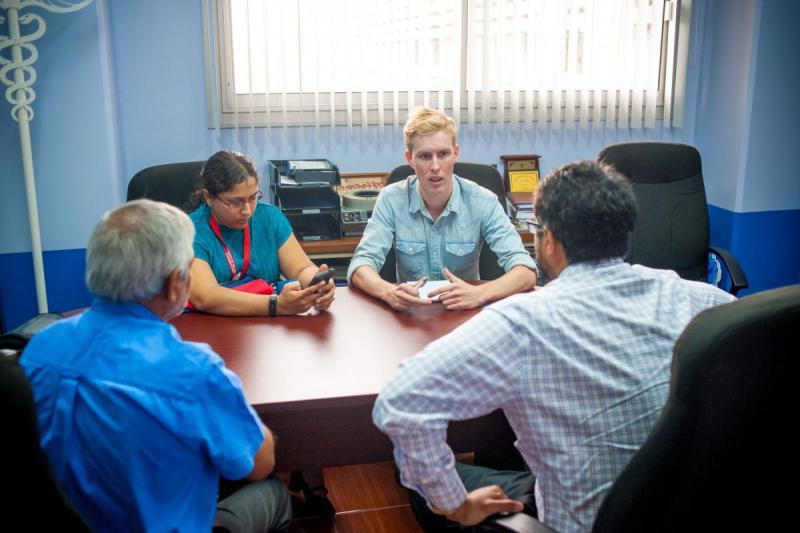 In October, Langerak visited The UWI Faculty of Medical Sciences in Mount Hope, Trinidad to meet with neurologists, medical researchers and laboratory technicians interested in collecting data for the international research project.

“We are collecting the data through an online, secure database. Only investigators will be given access to upload and view data. All the data is private and anonymous, and everything is done with the full consent of the patients,” Langerak said.

The project in Trinidad and Tobago is the first step to establishing a Caribbean-wide network of data contributors.

“You need quite a large group to be able to say something about an infection and a complication of the infection. And so, our aim is to collaborate with more Caribbean islands so that we have a larger number of patients involved in the study, so that we can have faster answers and more trustworthy results,” Langerak said.

He added that the Virology Department at Erasmus would be offering to conduct laboratory tests on samples for Zika and the Guillain-Barré syndrome antibodies for any researchers in the Caribbean contributing to the online database.

The launch of the Caribbean Guillain-Barré syndrome database comes a few months after the establishment of The UWI Regional Task Force of Zika, an initiative spearheaded by Vice-Chancellor Professor Sir Hilary Beckles. The creation of the Task Force was intended to improve information-sharing among Caribbean countries, in order to reduce duplicated effort and maximise scarce resources within the region.

The 11-member Task Force includes Eric van Gorp, a virologist at the Erasmus Medical Centre. Van Gorp was among 70 delegates who met in Bridgetown, Barbados in May to hammer out new ways to harmonise the Caribbean’s response to the Zika virus and other public health emergencies.

The Task is chaired by Deputy Principal of The UWI Cave Hill campus and experienced medical researcher, Professor Clive Landis.

“It is our hope that the regional Guillain-Barré Syndrome database will assist Caribbean countries to confirm the association between Zika and adult neurological syndromes and to strengthen the working relationship between The University of the West Indies and the duly designated public health agencies of the region when confronting high-level threats to the region,” Landis said.